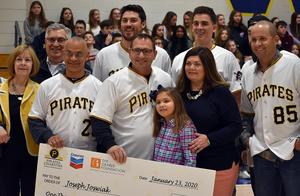 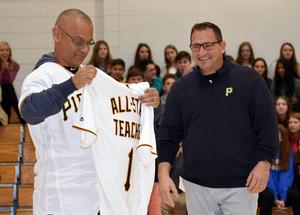 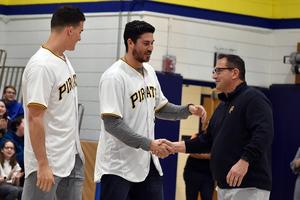 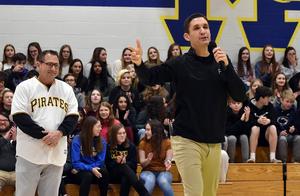 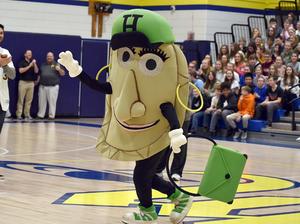 Joseph Joswiak, Mars Area Middle School health & physical education teacher, was named an “All Star Teacher” by the Pirates and Pirates Charities, which have teamed up with Chevron and The Grable Foundation, to honor exceptional local educators.

“The Pirates are passionate about a lot of things… but we are also very, very much about celebrating teachers and what they do,” said Joseph Klimchak, Pittsburgh Pirates In-Game Host, who along Pittsburgh Pirates players Nick Burdi, Will Craig and Goeff Hartlieb; coaches Joey Cora and Mike Rabelo; Pirates Pierogie Jalapeno Hannah; Tracey Armant and D’Ann Swanson of The Grabel Foundation; and Trip Oliver of Chevron, surprised Joswiak with the honor on Jan 23.

Hundred of nominations were received for outstanding educators in southwestern Pennsylvania and the West Virginia panhandle, said Klimchak. From those nominations, only 5-15 teachers are selected to be recognized as “all-stars.”

“(Joswiak has) 30 years plus pouring his heart and his soul into growing (students) not just physically, but academically, emotionally…,” said Klimchak. “He is so much more than a gym teacher. He cares. He is an innovator.”

At Mars Area High School, he served as an assistant coach of the Varsity, JV and Ninth Grade Baseball teams as well as the school’s Varsity Football, Softball, Wrestling and Volleyball teams. In addition, he was also a cheerleading sponsor and ran Mars Area Middle School’s Intramurals program.

Joswiak holds a master’s degree in special education from California University of Pennsylvania; and a bachelor’s degree in health & physical education from Slippery Rock University. Prior to joining Mars Area School District, he served as a JV Baseball Coach at Upper St. Clair High School and a teacher/counselor at Pressley Ridge Wilderness Center (Ohiopyle, Pa.).

In addition to being named an “All-Star Teacher,” Joswiak received a $1,000 grant to benefit Mars Area Middle School’s health & physical education program, a $100 gift card, a treasure box of Pirates merchandise, a personalized Pirates team jersey, and tickets to the Pittsburgh Pirates home game against the Cincinatti Reds at 1:35 p.m. on Sunday, April 5, where he will be honored on the field at PNC Park. He will also be recognized on the video board during an in-game celebration, in Pirates First Pitch magazine and on Pirates social media.