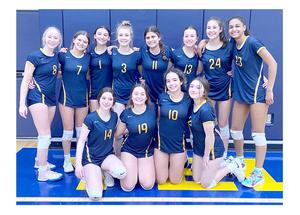 Mars Area Middle School Eighth Grade Girls Volleyball Team tied for the section championship with the team’s 2-1 defeat of the Freeport Yellowjackets on May 12.

The Lady Planets’ won the first set with a score of 25-23; was defeated 25-11 in the second set; and triumphed 15-11 in the third set. The girls only went to three games all season with one other team. The team ended the 2022 season with an overall record of 14-1.