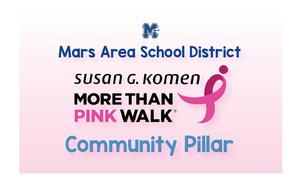 Beginning in Fall 2004, the District has held an annual “Hats for Heroes” fundraiser to benefit Susan G. Komen Foundation. As part of the fundraiser, all District students (K-12) were asked to make a donation in return for the opportunity to wear a hat in school.

“I was so inspired by how long (the District has) been doing this great fundraiser,” says Molly Sweet, Susan G. Komen Western Pennsylvania development manager. “The District did such a tremendous job for the breast cancer fundraiser this past October.”

Given the Mars Area school community’s continued efforts, the District was named as a Silver Level Sponsor of the 2022 Susan G. Komen More Than Pink Walk and the District’s logo was include on this year’s race t-shirts. In addition, the District was selected to represent the “Community” Pillar, one of Susan G. Komen’s four new pillars of focus — Research, Care, Community, Action — at the Kick-Off Ceremony prior to the event.